It’s the bane of any gardener – hobbyist and professional, and there are stringent laws that mean anyone selling a home must inform the new owner if they had ever had a problem with it, even if there is presently no trace and hasn’t been for several years. Japanese Knotweed is not just any invasive species, it’s a global problem due to its resilience. If you don’t remove all traces of it, it will definitely come back. Even then, there is no guarantee that it’s gone forever.

What is Japanese Knotweed?

Its presence in Europe is the result of a single German botanist named Philipp Franz Balthasar von Siebold. He sent a sample of the plant to Kew Gardens in 1850 who later sent it on to Edinburgh’s Royal Botanical Gardens. It remained a curiosity at formal gardens but in the 1880s, it was discovered growing in Wales and not in a formal garden. It is now problematic right across Europe, the Americas, Australasia and parts of southern Africa. The reason it is so virulent is that it doesn’t need seeds to spread; it can do so through mere fragments of the plant.

This Problem Needs a New Approach

The problem of Japanese Knotweed is virulent. Homeowners are understandably desperate to rid their property of the problem due to the damage it can cause. However, many over-the-counter herbicides used for other weeds sold at garden centres don’t work all that well. Even those claiming to fight Japanese Knotweed have not been subject to the sort of scrutiny that gardeners need to ensure it is removed from a piece of land and then stays away. 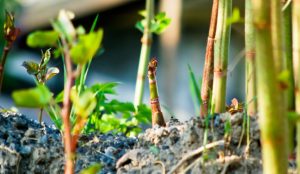 But a new approach is now being recommended following a published in an Open Access format (meaning anybody can read it – you don’t have to have access through an academic institute or pay for content) in a journal called Biological Invasions. Instead of looking at ways of destroying Japanese Knotweed (an approach that hasn’t really worked for the best part of 140 years), the researchers explained that a system of control and management might be better.

What We Know About Japanese Knotweed

We know it has an early growing season – beginning in late winter, typically around February. This means it has a growth advantage over most other plants that it usually freezes out, which tend to get going into March or later. It also gets the upper hand over spring plants because

• It creates a dense canopy which creates a lot of shade
• Uses chemical compounds to inhibit growth of anything that might challenge it
• Is immune to native diseases
• Insects will not feed on it.

Its position as the king of the soil wherever it is, is virtually assured.
We also know that it contains “significant” material underground and not just a few flimsy roots. Killing it above ground is ineffective – we need to remove everything beneath the surface too. All of this together makes Japanese Knotweed a virulent problem.

The trial considered and compared many herbicides – some over-the-counter and some available only industrially. Most proved to be ineffective but those that used glysophate demonstrated to be the most effective. This at a time when some governments are considering the banning of glysophate due to the belief that it harms native plan populations although actual evidence is mixed.

However, the report’s publishers were keen to stress that when the glysophate-based herbicide is applied is as important as what and how much. They recommend seasonal treatment, starting early and to do so regularly each year. This, they assure people, uses lower volumes of herbicides than other more traditional forms of control. If you have a problem with Japanese Knotweed, it is best not to try and handle it yourself but to call in professionals.